I Finally Got Some New Sportscaster Cards

There are usually a lot of shows in the Chicago area and flea markets would have opened by now in a normal year.  So, I haven't been able to pick up anything lately.  I took a chance on a Sportscaster lot on ebay.  It was listed at 500+ cards without stars.  It looked like a lot more than 500 and I could see there were many track and field cards so I took a chance. 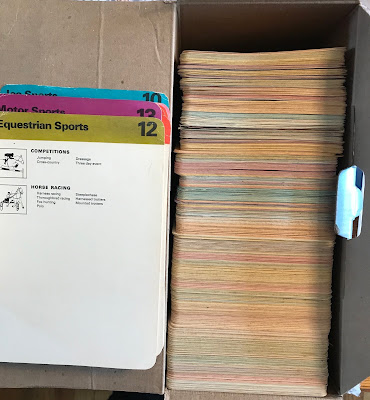 Surprisingly there was a Steve Prefontaine card and lots of other track stars.  There was not an NCAA Cross Country card with Prefontaine on the front.

The biggest stars were not there and I doubt that there are any high numbers.  It will be good to have a new pile of cards to sort and check for variations.

I was happily surprised that there were some boxing, football, hockey, basketball and baseball stars.  Unfortunately, many of the baseball cards were taped onto something and there is some paper loss as a result on some of them, notably Nolan Ryan, Ted Williams and George Brett.

All in all a good lot.  I won't count them but there has to be a lot more than 500.  If the stay-at-home order goes for all of May I will probably find time to go through them.
Posted by RunForeKelloggs at 6:43 PM

Sportscaster Cards That I Need